Search
Menu
5-10% of partners get postpartum depression or anxiety

Postpartum depression and anxiety in partners – Some Facts

You May also Like
Oh, shut up Fitbit! Are you making a human??!? 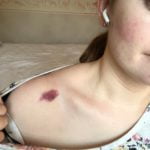