Hopefully, this doesn’t come as a surprise but labour and childbirth isn’t supposed to be silent?⁣
⁣
It’s totally normal to let out animalistic sounds, grunts and sometimes screams during contractions, and in many ways, it can be beneficial!

Moaning is a common sound heard in labour, it might be the same sound you made as your baby was being conceived 😊 ⁣ Moaning actually helps to facilitate the birth of your baby. When you moan in deep tones it’ll help keep your jaw loose and relaxed which in turn relaxes your pelvic area.⁣

Consider it this way — the same sounds you made when your baby was made are the same ones you need to make to help the baby out! Deeper tones as opposed to high pitched tones, it will help keep your jaw loose and relaxed which correlates directly to loose and relaxed perineum.

Roaring is a sound often heard during pushing. Labour nurses can often tell by sounds alone when it’s time to push!⁣

Screaming During Labour and Childbirth

Screaming Though movies would have you believe that all women giving birth scream, in reality, it’s not the most common noise. It can be, however, a sign that your not coping well with contractions or extremely afraid of something that’s happening or about to happen (inserting an IV, a cervical check, baby crowning). It helps to lock eyes with someone on the support team and be actively guided back to more regulated breathing.

Grunting is often heard when the baby is lower in the pelvis and you are near the end of your labour. This sound usually indicates that mom is feeling the pressure with baby low on the perineum

You May also Like
Preparing For Motherhood Is A Serious Thing

Singing During Labour and Childbirth

Singing can be a way to get into a ritual during contractions. You might start chanting/singing a certain mantra which in turn helps you cope with the pain! ⁣
⁣
Just remember, whatever sounds you make, it is likely helping you and is totally natural! Don’t be shy around doctors or nurses, they have heard it all (and worse)!

Allow yourself to let go and listen to your body. These sounds are most likely helping your labour progress.⁣

Did you make any sounds during labour? 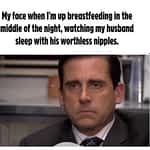 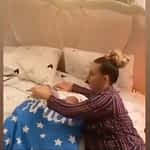