At 39 weeks pregnant, you’ve got what is officially considered a full-term baby!

Your baby now weighs around seven to eight pounds and measures 19 to 21 inches! Heidi Murkoff, author of What To Expect When You’re Expecting, takes you this amazing week of your pregnancy.

It’s week 39, and you’re in the homestretch now. Good news for your very-stretched out belly – and your larger-than-ever baby, since it’s pretty crowded inside there. It helps that your baby’s just about done growing, weighing in at 7 or 8 pounds – or maybe even heavier – and measuring up at 19 to 21 inches. The only thing still growing up a storm at the moment is your little one’s brain, which will continue to develop at a mind-boggling rate for the first three years of your smarty-pants’ life.

Also in development this week are his tear ducts, though they won’t actually produce any tears until several weeks after birth. So while your newborn will definitely be able to communicate his needs by crying – trust me on that – the waterworks won’t start rolling down those cheeks for a while. It’ll be all crocodile tears for your little gator.

And speaking of cheeks, your baby’s are chubbier and more deliciously kissable than they were just a short while ago. His skin now has a protective fat layer covering the blood vessels across his body, and his formerly translucent pink complexion becomes a tad darker as skin pigment starts to develop. No matter what skin color your baby will eventually wear, your little one will be born with a light skin tone until his pigmentation deepens to the color he’s destined to be.

You May also Like
Praying for all the women who are trying to convince! .. ...

And on top of his sweet little noggin he might be sporting a full head of hair. Or, he might be a cutie cue ball. Or, somewhere in between. But it doesn’t matter much. From head to toe, this just-about-baked baby finally resembles the little person you’ll soon come to know and love. 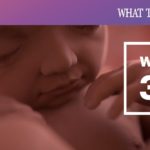 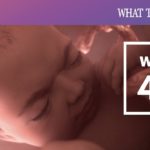