At 37 weeks pregnant, your baby’s lungs are likely mature — but that doesn’t mean he’s finished growing yet!

In fact, until the end of week 38 he’s considered “early term,” and he’s still packing on about a half an ounce per day or half a pound a week.

At Week 37, your no-longer little peach is ripe and ready. In fact, even if she arrived a tad earlier than expected, she wouldn’t be considered premature. Still, she’s smart to stay put, which, like most babies, she’s likely to do. With just three more weeks to go inside her uterine home, she’ll manage to pack on a pound or more, rounding out her frame and rounding up her birthweight – happily, without you having to gain another ounce.

By now, it’s likely your soon-to-be-born baby has rotated south to a headfirst position. Not all babies make this downward turn. About three to four percent of fetuses opt to stay stubbornly in the upright, or breech, position. If this is your first pregnancy, there’s a chance your little one’s head has or will soon drop into your pelvis in a process that’s called engagement, or “lightening,” since it lightens the pressure on your long-cramped diaphragm.

Engagement also means that your little bundle is locked and loaded and in position for departure, even if that departure isn’t scheduled for two or more weeks. Baby hasn’t dropped yet? Not to worry. She’ll make her way down and out eventually, just in her own sweet time. Second babies almost always wait to do their dropping until the labor party gets started.

Have you been feeling fewer punches and kicks? The fact that baby’s dropped is one reason. Her too-squished-to-move quarters is another. Or, it could be that she’s doing some more regular snoozing, clocking in long cycles of 20 to 40 minutes of shut-eye. Let’s hope she keeps that up once she’s on the outside.

What’s keeping her busy while she bides her time before D-day? She’s sucking her thumb to practice her nursing skills, brushing up on her breathing by inhaling and exhaling amniotic fluid, and blinking to prepare to protect her eyes once she’s born. She’s also busy accumulating more fat, forming dimples in those cute elbows, knees, and shoulders, and adorable creases and folds in the neck and wrists. Bet you can’t wait to kiss those dimples and caress those creases! It won’t be long now. 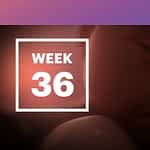 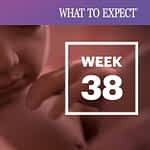 Back to Top
Close
wpDiscuz
0
0
Would love your thoughts, please comment.x
()
x
| Reply