Its week 34! Your baby has grown to as much as pounds and may be up to 20 inches!

Heidi Murkoff takes you the the 33 week of pregnancy, explaining everything that’s going on during this amazing journey!

Want to get a real sense of your baby’s size right now? Head to your supermarket’s baking aisle and pick up a 5-pound bag of flour. That’s about how much your little muffin weighs. Now, stack three bags of flour on top of each other. That’s how tall he is – well, if he could stand – about 20 inches in length.

Have a boy bun in the oven? Then hooray for his testicles, which started out tucked up in his abdomen and are now migrating to their permanent home, his scrotum. In about three to four percent of boys, the testicles hang out upstairs a while longer, lingering until some lads turn a year old. So don’t worry if your son is born with undescended testicles. They’ll make an appearance in the near future.

Both boy and girl babies are producing lots of sex hormones now, which will explain why the genitals may appear large and swollen at birth, and in the case of a little man, why the scrotal skin may appear darkly pigmented in the first few weeks after birth.

In other news, with just a few weeks to the big day, vernix – the white waxy coating that protects baby’s skin from amniotic fluid and provides lubrication for delivery – is thickening right on prepping schedule. Also right on schedule is the maturation of your little one’s intestines, enabling them to fully digest mama’s delicious milk when the time comes! 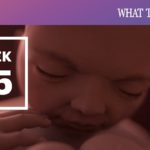