What’s up with your baby in week 32? She’s starting to get ready for her big debut, tipping the scales at almost four pounds and topping out at just about 19 inches.

At about 4 pounds and 16 to 19 inches long, your baby is curled up in, well, the fetal position. After all, there’s not much room left at this particular inn. Not to worry, though. She’s totally comfy in there, even if you’re not quite comfy out here.

As your baby hunkers down in your bunker to ride out the last few weeks of gestation, she’s probably settling into the most common birthing position: head down, bottom up. Anatomically, it makes sense. She’s maximizing what little space she has by dropping her head into the bottom of your inverted pear-shaped uterus. It’s also natural since baby’s bean is heavier than her tiny tush.

With only 8 more weeks to go, your busy bee is gearing up for life outside the womb. Those breathing movements she’s been practicing? Well, they’re almost perfect now, changing from the short staccato bursts of only 10 seconds long to a more regular and rhythmic pattern that’ll eventually churn out 40 breaths per minute – the normal rate of a newborn.

These breathing lessons serve another purpose as well, encouraging the lungs to produce more surfactant, the protein that’ll help the lungs expand after birth and that’s essential for healthy lung development.

You May also Like
Prenatal Get Rid of Muffin Top Workout: 1st & 2nd Trimester

Reinforcements for the monumental task of producing surfactant come from another source, too. The adrenal glands, located on top of the kidneys, are hard at working starting to pump out cortisol, which will in turn help stimulate more surfactant production. These workhorse glands are producing 10 times the amount of cortisol a normal adult produces. Pretty amazing for someone so small!

Meanwhile, lanugo is continuing to shed, leaving only small patches of fuzz on the shoulders and back. Fingernails have grown almost long enough to be in need of a trim, but they’re still pretty soft. Baby might not need a mini-manicure just yet, but there’s no reason why you shouldn’t treat yourself to one while you still have the time – a pedicure, too. After all, bet you can’t see your toes. 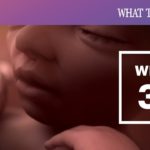 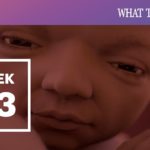