What size is your baby at week 26? Heidi Murkoff from the What To Expect When Expecting series tells us what’s happening this week during your pregnancy.

Your little one is the size of a turnip, weighs a whole two pounds, and is measuring 9-plus inches! Even though your baby’s eyes have been closed the past few month, they are now opening (unfortunately, the inside of the uterus isn’t all too exciting). Brain wave activity starts kicking in at this point in fetal development, hearing and responding to noises from the outside world.

At two pounds and nine inches long, your little nestling is having an eye-opening week. Until now, his fetal eyes were under wraps, quietly developing beneath fused eyelids. But now it’s time for the big reveal, as his eensy optic orbs open and blink. Of course, these newbie peepers are just learning to focus. Plus, there’s not much to see in the murk of his cozy confines. Still, it’s a big milestone and important practice for the moment when your little one’s eyes and yours lock for the first time.

Are you wondering if you’ll be looking into baby blues or greens or browns? Right now, the irises are still pretty pale. Pigmentation comes in over the next few months and even at birth, eye color is often in transition. It may not be clear if you’ve got a green-, blue-, or brown-eyed honey until he’s at least six months old.

Your baby’s first blinks of an eye may be adorable, but they’re also a very important developmental step. Blinking is a skill that’s essential in the outside world because it lubricates the eyes and protects them from foreign objects, including your little one’s own wayward fingers.

Looking a little lower on that adorable face, nerves around that bow-shaped mouth and lips are getting a lot more sensitive now, prepping baby for the all-important task of honing in on mom’s nipple once he’s born. Already, he’ll try to mouth whatever comes near those lips, including the umbilical cord.

And high inside that mouth – higher up in the gums than those baby teeth buds that developed earlier – are the first inklings of permanent teeth. Right now they’re just tiny buds, and they’ve got a lot of hibernating to do before they’re ready to poke out, but in six or so years, they’ll grow into pearly whites that’ll last your little one his whole life.

In other development news, your maturing baby is better coordinated now, especially when it comes to his hands. He can easily make a fist, suck his thumb, clasp his hands together, and even play with his toes. Can’t wait until you’ll be able to play with his tiny digits yourself? Why not start some baby games now with some poking play? Try returning his pokes with your own gentle prodding through your belly. You’ll both get a kick out of that. 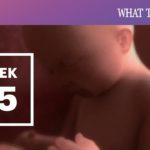 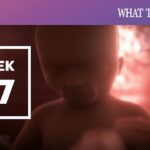