Gaining steadily at a rate of about six ounces per week, your baby tips the scales now at about one and a half pounds.Wondering what (and who) your baby will look like?

If you had a baby cam at 24 weeks pregnant, you’d almost be able to tell by now. That beautiful face (though still tiny) is almost fully formed. The baby’s hearing is even more acute, listening to everything from your conversations to what’s playing on the radio. Let Heidi Murkoff walk you through this weeks milestones, then go ahead and download the WhatToExpect app to keep up with even more information on your baby’s development!

She’s still just a hair over 8 inches long and weighs just a pound and a half, but this week your baby is starting to look much more like the cuddly cutie you’ve been picturing in your mind’s eye. Granted, her mini mug has some filling out to do, as does the rest of her slender silhouette, but as she accumulates more muscle and fat, she’ll plump up nicely.

And here’s another benefit to her rounding out. Once your skinny-minnie puts on more subcutaneous fat, her now translucent skin will become opaque. In other words, you won’t be able to see right through her birthday suit to her organs, bones, and veins like you could now – that is, if you had a window on your womb.

Is she ready for her close up? Almost. She’s still sporting bright white eyelashes, eyebrows, and hair, all of which have yet to acquire pigment. When they change to brown, red, black or blonde, you’ll have your very own cover girl.

And here’s a breaking brain bulletin. If you were to measure your little one’s brain wave activity, you’d see that it’s similar to that of a newborn infant. Wondering what that means? Those brains cells have matured enough to develop conscious thought and, most likely, memory.

Couple that with her amped up auditory system, and it’s no wonder that babies who hear certain musical pieces while in utero recognize – and are calmed by – the very same music when they’re born. So crank up the Beethoven, Beatles, or Black Eyed Peas. Your baby’s sure to get her groove on – now and later! 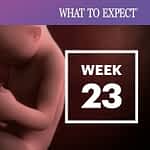 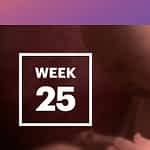