How big is your baby in week 21? About the size of a large banana (seven inches in length and almost 11 ounces in weight).You may be feeling more tired than usual from all the movement going on, but your baby sleeps about 12-14 hours a day. Even if it doesn’t seem so.

Want your baby to eat his or her broccoli later? Eat yours now! Your baby’s taste buds are highly developed now, and studies show that children exposed to certain foods while a fetus, are more likely to eats those foods later on in life.

It’s week 21, and your little monkey is about the size of a medium banana, around 7 inches long and almost three-quarters of a pound. As he gets bigger and bigger, you’ll be able to feel those movements more and more, at least when he’s not hunkering down for one of his many naps.

Naps? Yup. Though it may not feel like it with all the kicking and poking going on in there, your snoozer sleeps as much as 14 hours a day, but not because it’s boring at Hotel Uterus. On the contrary, you keep things very interesting simply by switching up the catering menu. Those teensy taste buds on his tiny tongue are now developed enough so while he can’t actually eat the foods you do, he can taste them in the amniotic fluid.

And taste them he will as he gulps several ounces each day for hydration and nutrition, and to practice swallowing and digesting. So sip on something spicy and within an hour or two it’ll feel like a dance party in your belly as your budding baby burrito gets a hint of that enchilada. Savor some scampi, and your little shrimp will catch a wave of garlic.

Need another reason to add variety to your second and third trimester menus? Studies show that babies who have sampled certain foods while in utero are more inclined to eat them once they hit the high chair. So putting broccoli, carrots, and kale on your plate now packs a one-two punch – great nutrition for you and your baby, and a greater likelihood your potentially picky eater will savor those veggies later on. 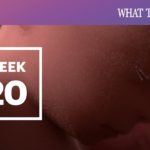 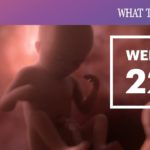