Curious why your body is finally looking pregnant? It’s because at 15 weeks pregnant your baby is quickly growing!

Heidi Murkoff, best selling author of the What To Expect series of books, guides you through week 15 of your pregnancy.From dental care in this important week, to how to deal with the weight gain, Heidi will you through it!

Remember way back to week 10 when your little sugarplum was the size of a prune and your uterus was the size of an orange? Now, just five weeks later, your not-so-little fetus is the size of an orange himself, and your uterus is a whole lot bigger, too, which explains the teensy baby bump you may be starting to sport. This week, your baby is tipping the scales at just over two ounces and is around four and a half inches long. Amazingly, he will double in size over the next few weeks, so be prepared to do some growing of your own in the weeks to come.

Meanwhile, there’s plenty of action going on inside that womb cocoon. The all-important placenta still acts as your baby’s kidney, controlling the fluid balance in his tiny body and shuttling waste products out into your system, but the fetus’s urinary system is now sufficiently developed to produce tiny amounts of pee. And we’re talking tiny, not more than a teaspoon of fluid. Still, his teeny tiny bladder fills and empties every 30 minutes, practicing for the diaper-filling days ahead.

Other developments down under: The swelling between your baby’s legs, which starts out life as the same indistinguishable tube of tissue, is developing into either recognizable boy parts or girl parts, AKA a penis or clitoris. Good news if you’re looking forward to confirming your dreams of baby blue or pink, though it will be a week or two, or even more, before an ultrasound will reveal your little one’s gender with any certainty.

In other breaking gender news, if it’s a girl, her ovaries are fully formed and are making their trek from the abdomen into the pelvis. Hundreds of thousands of eggs are developing within those ovaries, hoping one day to turn into fetuses themselves – your grandchildren! Got male? If your baby is a boy, his testes are now fully formed as well.

More good news! Your little one is starting to look less like an alien and more like the baby you’ve been dreaming of. His ears have finally found their way up from the neck to their proper position. Eyebrows are starting to develop. And baby’s eyes are moving from the side of the head to the front of the face – more Rembrandt, less Picasso. He’s a masterpiece in the making! 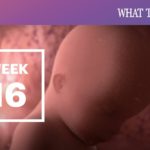