Heidi Murkoff from WhatToExpect.com gives a peek into how fast and furious your baby’s growth is at 10 weeks pregnant.

Your baby is nearly an inch and a half long and the size of a prune, but not nearly as shriveled (even with all the time spent in water). He or she is also really taking human shape! Bones and cartilage are forming and small indentations on the legs are developing into knees and ankles, and first teeth are growing.

Your baby’s growing by leaps and bounds and is already an inch and a half long and a quarter ounce in weight. That’s about the size of a prune, but happily, your sweet sugarplum is much cuter than the average prune, and not nearly as wrinkled. Baby’s head takes up about half his length, and your cutie’s facial features are quite recognizable now.

His eyes are hidden behind sealed lids and they won’t function until later in the second trimester, but a kissable button nose is visible and the external parts of those adorable ears have started to grow low down on the fetal head. Twenty tiny baby teeth buds are in place beneath his gums, though you won’t see any precious pearlies until your sweetie is about six months old.

Baby’s stomach and kidneys are operational now, churning out digestive juices and urine. That beating heart is now a fully functional four-chambered one. Two ventricles pump blood to the lungs and body, while the two atria receive blood from baby’s circulation. Your baby is also getting stronger, busy building bones and cartilage, and already sporting a pair of elbows that actually bend. Also under construction: knees, wrists, and ankles, so he can poke and prod his mama in the months to come.
If your baby’s a girl, her tiny ovaries are beginning to form even tinier eggs. Got a boy in your belly? Believe it or not, his newly developing testes are already starting to make testosterone. What a guy! 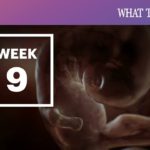